The Greece crisis has lost its charm to Chinese equity market crash, the financial experts are now more worried about Chinese economic stability than Greece debt crisis. Chinese equity markets just lost nearly 33% in last one month, yet the Shanghai index is up by 23% year till date. So how much does Chinese equity markets lost last month? Any guesses…!! It was just 150% of India’s gross domestic product, yes nearly $3,000 Bn has been evaporated.

The Chinese equity markets started to gain momentum mid of last year with the expectation of monetary easing by the People Bank of China (PBoC). The Chinese economy has been slowing down from last few quarters with PMI numbers remained close of 50, at times below 50, which indicates the contraction in the economic activity. That said, markets seem to neglect what was happening on ground levels and started to gain on expectation of extra-ordinary steps by Government and Central bank to fuel the economy. The Shanghai index rose nearly 150% in just one year period. This astonishing rally came under light of 4 times interest rate cut by PBoC to 4.85% level and increasing participation by the retail investors. The margin trading remained the first choice of the retail investors, who did not think twice to pledge their real estate to invest in equity.

The Chinese equity markets showed the classical quality of bubble, investors keep on buying irrespective of the underlying values of asset. The prices continue to raise despite the significant downward correction in earnings. Apart from announcing market friendly steps government has been involved in cheerleading the stock markets. Hence the government has a major hand in the bubble formation, which is exactly the reason why government has put its weight behind the market. The Chinese government has delayed the IPOs, allow companies to halt trading in their stocks, allowed pension funds to invest in equity markets, the forced brokers on a buying spree, increase the restriction on short-selling.

In these difficult times, everybody wants to ask a very important question. How fire sale in Chinese equity markets will affect the Chinese economy?  To answer the question lets assess the depth of participation of retail investors. Only 7% of the Chinese population is involved in stock market trading, fairly lower than US and Europe. Most of the retail investors have less $15000, exposure to the stock markets. Hence the current level of retail participation should not be a source of worry. The Chinese financial markets are still much closely managed by the government, which gives it enough fire power to stabilize the market in the medium term.

At last, the current situation in China has enough fire-power to push the world economy towards another great depression, but one should not forget how US FED stabilize the markets after the stock market crash in 1987. 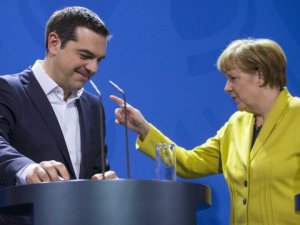 The China Republic, world’s second largest economy, has been outperformed by Greece, a country on the verge of default. Recent Google search data showed that in the month of June market participants have searched Greece crisis significantly more than a brewing Chinese crisis. The Greece crisis has been at center stage ever since the victory of Alexis Tsipras, who had won the Greek election on the promise of reducing austerity. Mr. Alexis Tsipras believes the EU and IMF must ease the terms of the loan and leave Greece independent when it comes to fiscal policy. On the other hand, the EU and IMF leaders have little faith in the Greece policies and want to implement strict norms to achieve a fiscal surplus.

The Greece has to make a payment of € 1.6 Bn, which it does not has, by Tuesday to IMF to avoid the default. Hence the Greece has continued on its hitherto followed path of negotiating with its lenders to issue a new loan to repay the previous one. First things first- will Greece default this month, or say, this year? From a game theory perspective the answer is ‘A Big No’. From the perspective of Greece, ‘An event of default’ would be a disaster and it would take at-least a decade if not more to regain the confidence of investors. From the perspective of lenders, EU and IMF, ‘An event of default’ might lead to a chain of defaults in Europe, pushing back European economic recovery, which is already breathing on borrowed oxygen. On the other hand, a deal will be a more of a balance sheet transaction than cash Flow. The funds sanctioned by lenders will be used to repay the loan to the same lender. Hence, both the participants have a lot of incentive to avoid default in near term.

What will happen in the long term? Frankly speaking, Mr. Tsipras has made electoral promises (high pension, high wages and high public spending) which he just can’t not afford. From the political perspective, this case has few things in common with the situation of Aam Aadmi Party in Delhi, where in Mr. Kejariwal had made unrealistic and anti-growth promises just to gain short term popularity. Just like Mr. Arvind Kejariwal has to hike the electricity bills Greece will succumb under EU pressure. Greece political class must understand that it can no longer afford recurring negotiation with lenders and it should start putting growth above the public friendly policies.

For European Union and IMF, it is more of problem of principle than funds as ECB is already printing nearly € 2 bn per day, more than Greece’s current payment. The European Union wants to set an example that an indebted country must practice policies of fiscal discipline, which will result in fiscal surplus. Unlike Greece, other troubled European countries like Spain has running a plunging primary budget deficit, strong growth, rapidly rising productivity, and a burgeoning trade surplus.

At last, the biggest risk for the financial markets is the reckless behavior of Greece leaders, who believe that EU and IMF just can’t afford a Greece default. A similar state of mind was shared by Dick Fuld, CEO of Lehman Brothers ultimately leading to the demise of the bank.